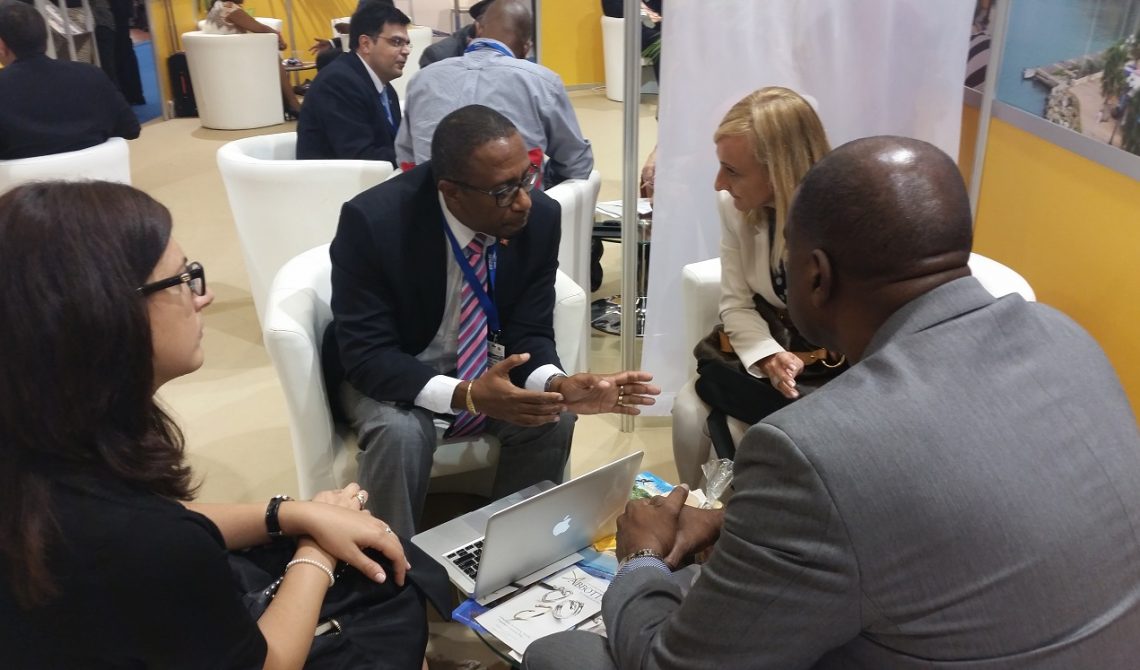 (Barcelona, Spain) September 18th 2014: Antigua and Barbuda Tourism Officials are relentlessly pursuing cruise business for the destination as they negotiate for more cruise calls, at Seatrade Europe in Barcelona Spain. The annual event held from September 15th – 18th is the largest gathering of Cruise Tourism Officials in Europe.

Antigua and Barbuda collaborated with 15 regional destinations for the show, with the country’s two-member delegation, Antigua and Barbuda Tourism Authority CEO, Colin C. James, and Nathan Dundas President of the Antigua and Barbuda Cruise Association working from the “Caribbean Village” to ensure cost effective access to the European cruise market. They were joined by representatives of Sea Escape Tours, a new company, offering a unique undersea viewing experience for the upcoming season. 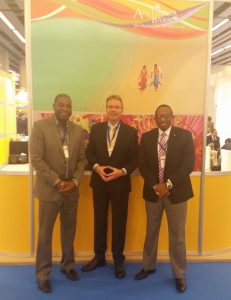 The senior tourism officials are reporting, after a packed schedule of meetings with European cruise executives, that, Antigua and Barbuda is forecasted to have a bumper cruise season for 2014/15 with an estimated arrival of over 700,000 cruise passengers which represents a 15% increase in passenger arrivals from 297.

Coming out of meetings with Nicoletta Puppo Head of Port Operations for major Italian Cruise line Costa Cruises, the destination can confirm, an increase to 45 calls for the upcoming season from 4 ships. This is a doubling of our ship calls from Costa, which represents the largest number of passengers to visit Antigua and Barbuda.

Costa Cruise executives have said that, Antigua and Barbuda continues to perform well and delivers excellent service to its passengers. The provision of Italian German and French language tour guides was particularly noted, as “very important” for the European Cruise Lines.

MSC Cruise lines, the other major Italian cruise line has also reported an increase in ship calls to 18 for the upcoming season up from the 16 calls for last season.

The cruise lines with smaller ships that cater to a more up-market clientele have also observed an increase in demand for Antigua and Barbuda, with a resultant increase in their ship calls.

In discussions with Sander Groothuis of Windstar Cruises, 7 new calls were confirmed in 2015 for Barbuda each bringing a total of 300 guests. The smaller Windstar ships which berth in Falmouth also confirmed that theirSunday calls to the destination will have a midnight departure to allow their guests to experience the Shirley heights sunset party. Windstar Cruises’ high-end guests continue to give the National Parks the thumbs up with lots to see and do.

The Tourism Authority CEO, Colin James commented that “The growth we are seeing is very encouraging, but we cannot be complacent as Antigua and Barbuda and the rest of the Caribbean faces increased competition from other global cruising regions. The Cruise lines will seek to deploy their vessels wherever they can make the best return on their investments.  We are now for the first time seeing Cruise vessels being deployed in the winter in the Mediterranean, which is in direct competition to our business. We must now redouble our efforts to renew and grow our position as a marquis destination in the World’s #1 Cruise Region.”

Nathan Dundas Chairman of the Antigua and Barbuda Cruise Association said “our main objective at Seatrade Med was to meet specifically with all our European partners with the primary objective of securing more calls, and we have achieved that objective.

We are particularly pleased that public private sector partnership with the incentive to allow the smaller cruise ships to have a second day in Barbuda are now beginning to pay off with a forecast of 10 calls to the sister island for the upcoming season. This is renewed confidence in our product and the service that we offer to our cruise line partners,” added Dundas.

Negotiations with V Ships Leisure – Allesandro Pino, Planning and Operations Manager and Anne Saurat from Club Med were particularly successful, with the most calls ever into the destination scheduled for the season.

Ms. Saurat commented that she was delighted that the previous negotiations and planning to bring business to Barbuda is now a reality. Club Med confirmed 3 calls dedicated to Barbuda this season each bringing 300 passengers.

Javier Marin Martinon Corporate Strategy and itinerary Planning Manager for the Pullmantur Group which caters to the high end French market confirmed that they are now scheduled to return in 2015/16, with possibility of a minimum of 9 and a maximum of 18 calls to the destination.

While, at the show, the Antigua and Barbuda team also updated cruise executives, and industry media to include, Sea trade Cruise Review, of the planned upgrades to the St John’s Harbour, and surrounding environs.  The upgrades will ensure that the destination can not only handle the larger vessels, but can provide all the facilities to create a first-class visitor arrival and departure experience for our guests.

Seatrade Europe 2014 attracted over 250 exhibitors from some 50 countries with the who’s who of the industry in attendance. The event presented Antigua and Barbuda with a not to be missed opportunity to meet its many valued cruise clients and secure more business for the destination.