NEW MINISTER OF TOURISM TOUCHED DOWN IN THE UK 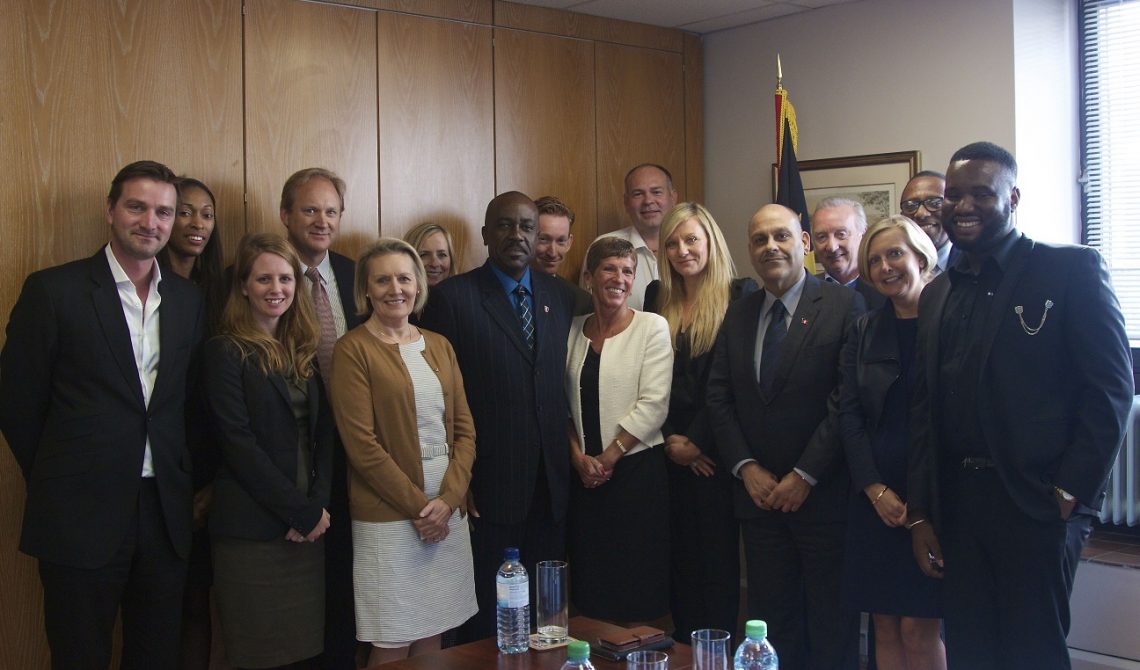 NEW MINISTER OF TOURISM TOUCHED DOWN IN THE UK

Honourable Asot A. Michael, the newly appointed Minister of Tourism, Economic Development Investment & Energy, for the Government of Antigua and Barbuda, touched down in the UK on Monday 22 September for a packed itinerary during his 48 hour trip. Also joining the Tourism Minister was the Hon. Paul Chet Greene, Minister of Trade, Commerce, Industry, Sports, Culture and National Festivals. CEO of the Antigua and Barbuda Tourism Authority Colin C. James and the UK based tourism staff were also in attendance at the meetings with members of the travel trade, tour operators and Hotel Partners. The objective of the meetings was to update them on the developments in the industry and solicit their feedback in creative ways to continue to grow and develop Antigua and Barbuda’s vital tourism sector.

Minister Asot Michael touched upon the “strong cultural ties” that the two nations share over the years and announced that  “the destination had enjoyed a robust growth of visitors from the United Kingdom this year, with the UK being “the best performing market for overseas air arrivals recording a 10% year-on-year growth rate”.

13 hotel partners representing most of the properties on island attended an early afternoon sessions while 21 of the major UK tour operators accepted an invitation to dinner for a face to face update on tourism developments in the twin island nation.

Minister Michael’s update to both tour operators, and hotel partners focused on upcoming infrastructure developments, such as the New Sandals Beaches Resort, China’s Yida International US$2B investment and Antigua and Barbuda’s brand new Airport Terminal.  Hon. Asot Michael proudly described the new airport terminal as “the largest in the Eastern Caribbean which will open by March of 2015 equipped with Jet Bridges, multiple VIP lounges and high-end duty free shops”. The new airport terminal will double the current capacity of visitors that pass through the V.C. Bird International Airport, and will greatly improve the visitor experience.

This news of the new developments and airport was well received by the hotel partners and prompted a lively discussion where the partners raised key product issues of concern to them. These included the high cost of utilities, the need for more customer service training for key frontline workers who interact with visitors and affordable airlift in the summer months. The need to be more efficient in the way we capture passenger arrival information was another area that was of concern to the hotel partners, with suggestions to include all members of a family on a single immigration form. This plus an automated way of collating the passenger arrival data was recommended, as a way to lead to faster reporting for quicker marketing decisions.

Minister Michael updated the hotels on recent energy initiatives that the Government had agreed with Venezuela, which will soon lead to a significant 12% reduction in energy costs. He also reported on a recent commitment from the new Airport Authority Board to ensure that all customer facing staff benefit from new customer service training to coincide with the opening of the new Airport Terminal.

The Hon Paul Chet Greene also updated the partners on an initiative to use the Sir Viv Richards Cricket Stadium for Sporting Tourism Activities for visiting UK county and school cricket teams which will stimulate much needed business during the slower summer period.  Minister Greene indicated that the Government is currently conducting an audit of its heritage and historic tourism sights to ensure that they are developed in a sustainable way to contribute to the country’s heritage tourism.

The tour operators were pleased with the destination’s performance and strong demand for the upcoming winter and sought a commitment from the Minister for more funding to be made available for Co-op Marketing initiatives to continue the positive growth.

As part of his mandate the Hon. Asot Michael is looking to strengthen relationships with all airline providers, tour operators, travel trade and members of the media. This is a key component of the new Government’s strategy to further develop the industry, and drive arrival numbers. The end result will be increased employment for nationals, more foreign exchange earnings, higher tax revenue for the government and a raise in the national income. This will ensure Antigua and Barbuda will see steady growth and sustainable development for the nation,