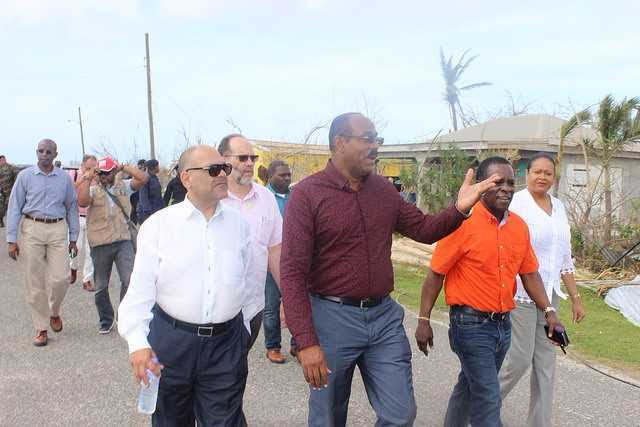 (CARICOM Secretariat, Turkeyen, Greater Georgetown, Guyana)     CARICOM Chairman, Prime Minister Dr Keith Mitchell of Grenada and Secretary-General Ambassador Irwin LaRocque on Wednesday completed a tour of hurricane devastated islands and have indicated that arrangements are being made  to convene an international  Donors Conference to mobilise the ‘significant resources’ required for the recovery effort.

Antigua and Barbuda’s Prime Minister Mr. Gaston Browne joined the Delegation for the tour of Barbuda where Government’s assessment shows more than 90 percent of the buildings on the island were destroyed. Prime Minister Browne confirmed that all Barbuda residents have been relocated to sister island Antigua, with just a contingent of military personnel remaining to provide security.

“I’m very grateful for the visit by the CARICOM Chairman, Secretary-General and other members of the delegation.  It shows we have other Caribbean brothers and sisters who are standing in solidarity with us,” Prime Minister Browne said after taking the delegation on a walk-though Barbuda’s devastated capital, Codrington.

“Clearly, this is a very difficult time for Antigua and Barbuda and we are very appreciative of the support and, certainly, all of the pledges that will be made,” he added.

In the British Virgin Island, where the delegation toured affected communities and met with Premier Dr Orlando Smith and Government and Disaster Management officials, the focus is on meeting critical immediate needs such as water and food supplies and restoring access to electricity and telecommunications, while simultaneously working on arrangements for getting students back into schools and getting critical sectors of the economy such as tourism and financial services back up to speed.  Premier Smith noted that the Government headquarters building is among the those destroyed and his office has  had to be re-located to the main hospital building.

Anguilla’s Chief Minister Mr. Victor Banks, who joined the CARICOM Delegation on the tour of his island where the main hospital, schools and 90 percent of the homes were damaged, said  he is also working to address the pressing need for food, water, building supplies and electricity and confronting any challenges to the critical tourism sector.

Prime Minister Mitchell, acknowledged ‘the extremely high level of devastation’ in these and the other affected islands,   and  said substantial international support is required to build on the ongoing financial and other contributions by Caribbean governments, individuals and organisations.
“The plan is to organise a regional and international aid conference that can help to get significant pledges towards the reconstruction effort of these countries.  This will be similar to what we did in Grenada (after hurricane Ivan devastated the Island in 2004) and we got significant support”.   Prime Minister  Mitchell said.

He said the requested support must include psychological counselling to help affected persons overcome the trauma of the hurricane Irma experience.  “We will use our regional and international contacts to leverage the required support” he added.

Secretary-General LaRocque said, given the scale of the destruction, countries and institutions in the international community must be willing to build on the current relief efforts by the Caribbean Community and he said invitations are already being sent to development partners for the soon to be convened Donors Conference.

“The governments can’t do it alone.  We need to mobilise international help from partner countries in the international community. We hope to have this donor meeting as soon as possible and the mobilisation has started,” the Secretary-General said, adding that a representative of the UN Offices in Barbados who was included on the tour has already been in contact with his head office.

In the meantime,  CDEMA has been facilitating much of the regional collaboration through a hub in Antigua for the affected Eastern Caribbean islands, and one in Jamaica for the Western Caribbean, including the Turks and Caicos Islands, Haiti and The Bahamas.  CDEMA, working in conjunction with National Disaster Management offices has been coordinating the provision of required personnel, relief supplies and other support in the run-up to, during, and after the passage of Irma.