Minister Michael Back in Business

Minister Michael Back in Business

St. John’s, Antigua and Barbuda: Bi-lateral discussions between the Minister of Tourism, Economic Development, Investment and Energy, the Hon. Asot Michael and US Senator Joel D. M. Ford of the 38th District of North Carolina identified Major areas of collaboration during his first official visit to the twin island state of Antigua and Barbuda.
During the talks, Minister Michael took the opportunity to present an overview of the state of the Tourism Industry in Antigua and Barbuda, identifying the need to bolster the current hotel room-stock of 3000 by 100%. This in an effort to expand and improve the high-end product already offered in the twin island state. 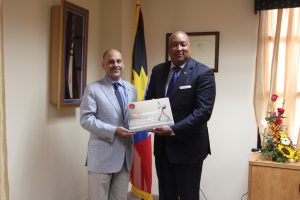 As such, Minister Michael identified three of the islands major properties which have been targeted for investment namely The Royal Antiguan Hotel, as well as The Hawksbill and Jolly Beach Resorts. According to the Tourism and Investment Minister, “the government is not about the business of expropriating properties from locals or foreigners; however we cannot afford to lose our product by allowing these properties to become derelict, and thus the reason for moves of acquisition such as the one at Halcyon Hotel”. Senator Ford who already identified a group of hotel investors in the Charlotte district will be treated to site visits to the aforementioned properties to get a first-hand view of the potential for investment. 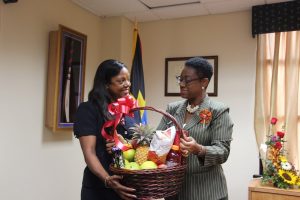 In the area of airlift Senator Ford has offered his assistance in seeking to negotiate flights from the active Charlotte North Carolina hub direct to the V.C. Bird International Airport. Minister Michael cited the need to recapture the US Airways market out of that area direct into Antigua.

Negotiations for a major project which falls under the ambit of the Hon. Minister’s investment portfolio but which centers within the Agricultural Industry are near completion. This involves the construction of a modernized chicken processing facility. Mrs. Fredericka Ford Kolade, sister to Senator Ford and the President and CEO of Browneford Farms Corporation, is excited about the project which has huge potential for growth and derivatives. Chairman of the Agriculture Development Corporation, Randy Baltimore says that already the lands have been identified and leased and the concessions are currently being processed. Senator Ford pledged the exchange of Technical assistance and Training in the area of Agriculture.
“I hope that this relationship will be long term and that we can be a serious and strategic partner and ally because our parties share the same philosophy”, Minister Michael stated. He continued, “We are very much honored that you and your sister chose Antigua and Barbuda to do business and to assist us in these target areas and whatever we can do as a government, we will ensure that it is done in a very efficient and expedient manner”.
Permanent Secretary within the Ministry of Tourism, Economic Development, Investment and Energy Mrs. Paula Hunte used the opportunity of the official visit to the Ministry’s headquarters to present Antigua and Barbuda memorabilia to Mrs. Kolade while the Hon. Minister presented a copy of the award-winning Antiguan publication Table-manners to Senator Ford.
Senator Joel D. M. Ford along with his team will be hosted in Antigua and Barbuda for a week and will participate in upcoming activities in commemoration of the nation’s 34th Independence celebration.