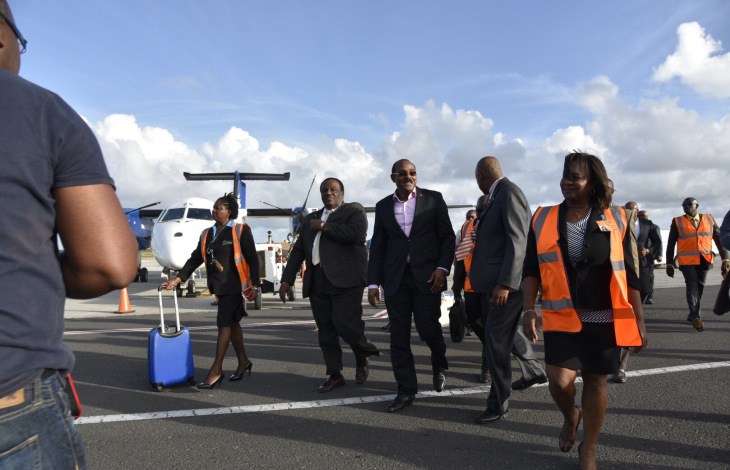 In a scene reminiscent of the 2014 election campaign, scores of Antigua and Barbuda Labour Party (ABLP) supporters were present at the VC Bird International Airport Sunday afternoon to give a hero’s welcome to Prime Minister, the Honourable Gaston Browne. Splendidly attired in the ABLP colour of red, the supporters hugged and generally showed warm affection for their PM Browne. Last week, PM Browne successfully completed the West Indies Oil Company Ltd. purchase, this described by many as the second most important purchase of assets by a government, for and on behalf of the people of Antigua and Barbuda.

It was the Prime Minister’s first trip back since he signed the historic West Indies Oil Company purchase on April 1. A contingent that included Cabinet colleagues as well as senior officials of the police and Defense Force met the Prime Minister as he alighted from a LIAT aircraft at the airport.Following a brief reception in the VIP Lounge, PM Browne was warmly greeted by scores of Antigua and Barbuda Labour Party members welcoming him home.

ABLP General Secretary, Senator Mary Claire Hurst says that the special welcome was organised to show appreciation for the successful completion of the WIOC purchase. From the airport, the welcome party walked to the nearby Sticky Wicket where PM Browne, ABLP’s chairman Hon Paul Chet Greene and, Chief of Staff Lionel Max Hurst, addressed the party faithful. The Prime Minister expressed his appreciation and gave a commitment to work at all times in the interest of the people of Antigua and Barbuda.