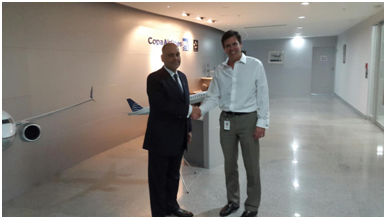 The Honourable Asot Michael, Minister of Tourism, Economic Development, Investment and Energy visited the Republic of Panama in an effort to promote the advantages of all International transportation services offered by the Government and people of Antigua and Barbuda to Panamanian and Central American countries.  He had exploratory meetings with private companies most notably Copa Airlines with the intent of establishing new airlift from the Copa Panama hub from Tocumen S.A. Airport to Antigua. This was a strategic and proactive approach by the Government to grow airlift and to maximize on services available with the new airport terminal.

The Minister had a very productive meeting with the Vice President of Commercial Planning and Alliances of Copa Airlines Mr. Joseph Mohan and his team.  In the very near future the Government and Copa Airlines will be reviewing a formal proposal with a view to Antigua becoming a destination point and possible transit hub for the region.

Key to this promotional thrust is the new immigration benefit program to be launched which waives visa requirements for most Latin American countries and opens up an entirely untapped Tourism and Investment market for Antigua and Barbuda.

Minister Michael continues on to Bogota, Colombia where he will continue the Governments agenda to promote Investment both in the private and public sector.