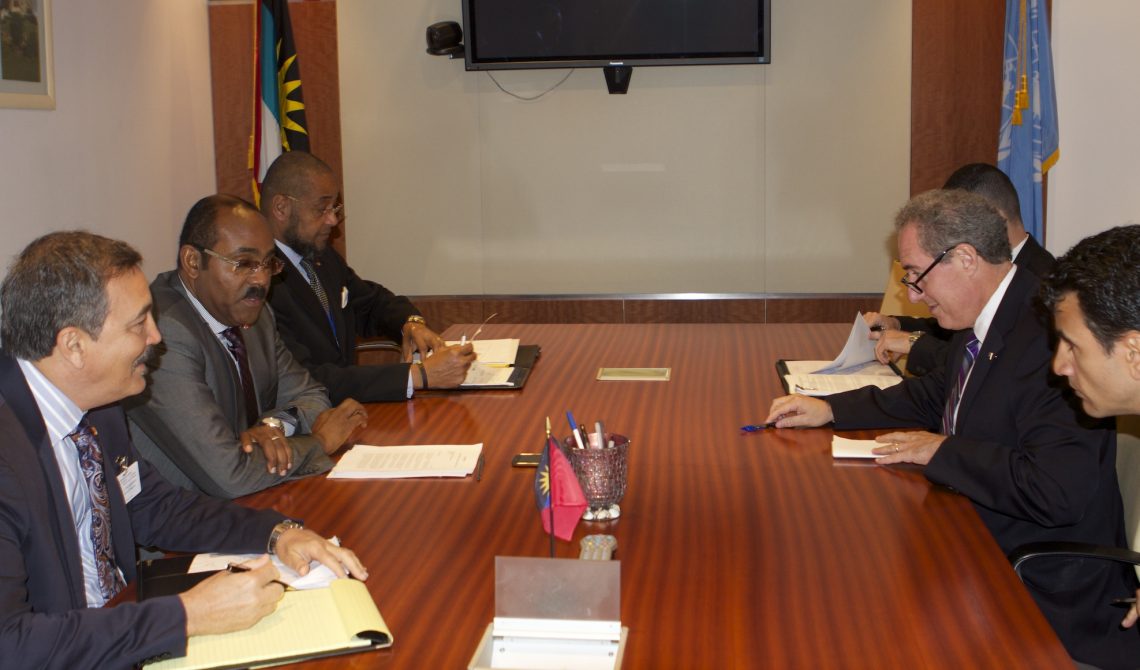 NEW YORK, NY, USA – 29th September 2014…….Prime Minister the Honourable Gaston Browne, one day following his address at the United Nations General Assembly during which he called on the United States Government to settle the outstanding WTO Gaming issue with Antigua and Barbuda, held bilateral talks with senior US officials designed to resolve the issue. Prime Minister Browne met US Trade Representative, Mr. Michael Froman at the UN Mission of Antigua and Barbuda on Friday morning where both men sat down to open dialogue about the stalled trade dispute and discussed practical ways in which the matter could be brought to a conclusion. Prime Minister Browne was accompanied by the Minister of Foreign Affairs and International Trade Hon. Charles ‘Max’ Fernandez and Permanent Secretary in the Ministry of Foreign Affairs Ambassador Colin Murdoch. Both sides agreed to put a team together to work out the details of their discussion, and PM Browne undertook to name his team within a week. Following the meeting Prime Minister Browne outlined,  “I am encouraged that my administration has been able to secure a meeting with the US Trade Representative, Ambassador Froman so early. Ambassador Froman is a Cabinet-level officer of the US Government and this should facilitate decision-making on policy matters.” Prime Minister Browne had devoted a significant part of his address to the UN General Assembly on Thursday to the WTO gaming case, and claimed that the international trading system had not delivered economic justice for Antigua and Barbuda. In his meeting with Ambassador Froman, PM Browne had outlined the economic losses suffered by Antigua and Barbuda as a result of US non-compliance with the WTO ruling. Both sides are expected to resume discussions in the coming weeks.