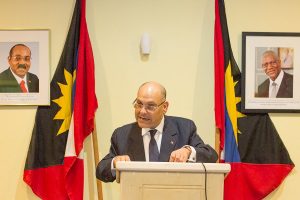 Every now and then, the political landscape in our island democracies is visited by a rare breed of politician who epitomizes the spirit of service above self, who devotedly places his possessions at the disposal of those in need, who “walks with kings but never loses the common touch”, and who gets things done by “keeping his head about him” even as others are “losing theirs and blaming it on him”.

Since March 2004, the blessing of that extraordinary brand of political representation has been in the hands of the people of the St Peter’s constituency.

“I give thanks and praise for my beloved constituents with whom I have been privileged to develop a personal bond built on a solid foundation of love and mutual respect for each other that transcends narrow, partisan politics”.

In all he does in politics and government, Asot Michael operates with a passion for excellence, a hunger for results and an uncommon love for people, their well being and progress.

“I have always been that way… Politics has always been in my blood I grew up in a family where my parents and grandparents were always looking out for people and wanting to see them succeed as well as they could. My father Patrick Michael sacrificed his business in support of the ABLP during its darkest days in the 1970’s. And the Michael generation before him was even more involved in the socio-political life of Antigua and Barbuda.

“So I guess as far as it concerns politics and working with people, I have just been living the values I picked up from my family… Then there were all the valuable little lessons I learned from some of the best politicians in Antigua and Barbuda like Papa VC Bird, Lester Bird and Tim Hector. But I think the most important thing is that I really enjoy what I do…”

Indeed, to see him leading a convoy of trucks through every street in the constituency personally delivering Christmas and New Year goodies to every family is to be up close with a politician in peace and harmony with his purpose.

And when he rises in Parliament to articulate concerns about the good and just governance of Antigua and Barbuda, it is crystal clear that the darling of St Peter’s is not just in tune with his people development mission but also destined to ensure it succeeds.

“So the people who came first with Labour have actually ended up last under the UPP and we have to change that… We have to return to the good old days of people doing well instead of catching hell”. 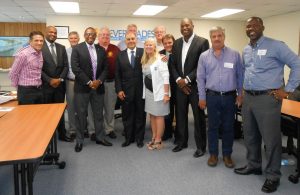 As a Minister of Government he demonstrated critical competencies and emerged as one of the most successful government negotiators on major investment projects and assistance programmes. With his excellent people skills he was able to build a valuable network of political and business leaders from around the world which remains a reliable resource for translating global contacts into advantages for Antigua and Barbuda.

Apart from the simple truth that he is a caring, down-to-earth people’s person, his rapidly growing army of fans around Antigua and Barbuda admires the fact that Asot has distinguished himself as a man who gets the job done in the public interest regardless of the difficulties encountered in the process.

Others make excuses, Asot makes it happen. Added to that, since people will always place their trust and confidence in those who commit themselves and their own resources, and work hard with sincerity of purpose for the greater good, there is really no electoral challenge to fear:

“Actually, I anxiously look ahead to the upcoming general election when the people of Pares, Parham Town, Vernon’s, Gunthropes, Lindsay, Paynters and Fitches Creek will give the failed candidacy of Joanne Massiah the rejection it deserves

“For more than four years, the sidewalks were over grown; there were Cassie trees to be cut in Paynters East; street lights were needed; open sewerage was running from the bath rooms on the Basketball Court in Parham; there were no lights on the court – they even wickedly cut the electricity on the courts in Pares and Parham; the roads were in total disrepair; and the UPP Candidate was conspicuously missing in action

“The people of the constituency were mercilessly victimized left, right and centre… They were the first to be sent home from Public Works and the Antigua Port Authority… and Candidate Massiah was nowhere to be found in the constituency…

“Today, she is all over trying to catch votes. But Miss Massiah can rest assured that the people of the St Peters Constituency will never forget the wicked victimization that the UPP administration meted out to them for voting their labour party candidate to represent them in Parliament”. 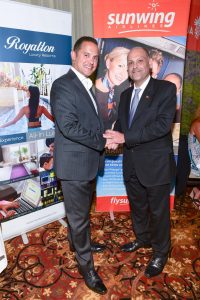 One of Asot’s main strengths as a politician is his proven ability to define and articulate the next level of advancement for the people he represents. Accordingly, and given the UPP engineered reversals in the welfare of the people since 2004, he is knows better than anyone else there is tremendous work to be done.

Under the incumbent’s leadership, this constituency has led the way in recent years in privately funded facilities for sports, recreation, computer technology and food delivery. Asot has also been exemplary in using his own personal resources in the causes of less burdensome cost of living, proper infrastructure, crime reduction, adequate health care and education throughout the constituency.

His vision is fundamentally about economic transformation capable of generating the opportunities that will allow constituents to do better for themselves, their families and their loved-ones

The ABLP’s candidate for St Peter’s is anxious to move ahead with the party’s plan to modernize local government across Antigua and Barbuda through the creation and introduction of high performance community committees/councils working in collaboration with the Parliamentary Representative to discharge the day to day responsibilities of constituency development.

The principal target areas for the work of the community committees/councils will be economic and business opportunities, safety and security, infrastructure, human development and social affairs.

As Asot humbly seeks the support of the People of St Peter’s for a second term as their Parliamentary Representative, there can be no doubt about the high esteem in which his genuine love for people and his outstanding record of service are held across Antigua and Barbuda.

He has some advice, especially for those who will hear about the UPP plan to buy votes with the promise of economic relief:

Take all the relief
But remember the grief

Whatever you get
Was taken from your pocket

So welcome the tax break
But remember the heart ache

And say never again
To the UPP tax pain

And just so they know what you are about
When election comes, eat dem out
Drink dem out
And vote dem to hell out