The ABLP has been in office for less than four years. It inherited an economy in shambles from the UPP. Between 2009 to 2014, the economy contracted by an annual average rate of 3.4 percent in the worst period of mismanagement our nation has ever witnessed.

Our country suffered three years of negative growth. Cumulatively, that amounts to a regression of 21 percent. Simply put, nearly a quarter of Antigua and Barbuda’s economy or more than $800 million in value went up in smoke, burnt by searing incompetence and maladministration.

It is a matter of public record, that the UPP bankrupted our nation and, to try to bail out its abject failures, took on an IMF structural adjustment programme in 2010, borrowing $320 million.

And, while the UPP administration sucked over $800 million out of the economy; it also borrowed huge sums of money, applied stringent taxes to already overburdened tax payers, caused businesses to close, new investment to halt, unemployment to rise, mortgage and loan defaults to increase, and poverty to expand.

They decimated our country and the living standards of our people.

Undaunted, the ABLP leapt to the task of making our country better for good, improving, uplifting and advancing our economic and social circumstances for the benefit of all.

Despite severe challenges, in less than four years, the ABLP government has:

• Restored the $800 Million in value, that the UPP, and particularly Harold Lovell as Finance Minister, demolished.

• Put the country on a firm trajectory of growth. In 2016, Antigua and Barbuda was the fastest growing economy in this hemisphere at 6.5 per cent.

• Notwithstanding the effects of the September 2017 hurricanes, in that year our nation regained its enviable place as the largest economy in the OECS sub-region; larger than other countries with bigger populations than ours.

Despite every trial, in less than four years, we have enjoyed economic growth that halted the decay in our economy and set us on a new course to prosperity.

2. ABLP TURNED THE NATION FROM DEBTOR TO OWNER

The UPP left the nation an empty Treasury and demands that were plenty in June 2014. The UPP did not pay suppliers for goods and services they contracted. Despite all the taxes they imposed, they had borrowed so much and introduced so many wasteful projects, which were not revenue-generating, that they had no money.

The country was burdened with a debt stock of approximately $3.7billion with a repayment schedule of over $430 million annually. The debt to GDP ratio was 104% – indeed, the country was bankrupt.

The ABLP government accomplished the following: 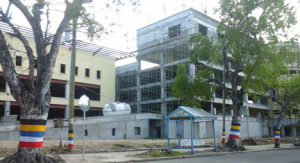 US$25 million car park abandoned by the UPP

Ten years of UPP reckless liabilities have been turned into ownership and earnings for the people of Antigua and Barbuda under the ABLP in under four years.